Heidi Klum Cheers On Henry at His Soccer Match 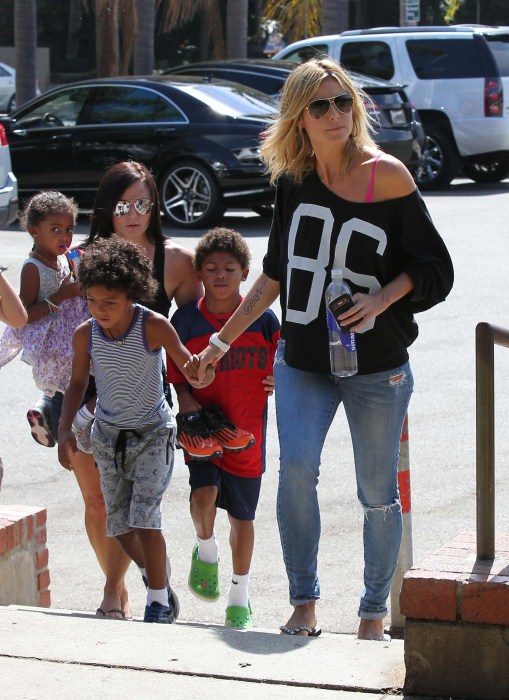 Heidi Klum and her children were spotted at a soccer match in Los Angeles, Ca on Saturday. The family were present to support Klum’s eldest son Henry in his soccer game.

The Project Runaway host wore casual jeans and a black shirt with the number 86 printed on the front while accompanied by her bodyguard boyfriend Martin Kristen as she sat on sidelines. Klum was spotted doting on Leni during the game and and later took a break from the game to walk with daughter Lou.

Klum is set to host the 2012 MTV EMA‘s. The event takes place at Frankfurt’s historic Festhalle and will broadcast live on Sunday, 11th November at 9PM on MTV channels.

“I’m honored to host the ‘2012 MTV EMA’ in its return to my home country of Germany,” said Klum, a native of Bergisch Gladbach, just two hours outside of Frankfurt. “The MTV EMA is one of the biggest nights in global music, fashion and culture, and I’m thrilled to play a part in bringing this one-of-a-kind show to audiences all over the world. We’re going to have a blast!”

“Heidi is absolutely one of the most successful and recognizable multimedia stars on the planet,” said Bruce Gillmer, Executive Vice President of Talent and Music Programming/Events, Viacom International Media Networks. “She is very clearly the best choice to helm the ‘2012 MTV EMA’ in Frankfurt, and we’re looking forward to showcasing her incredible talent within the extremely dynamic EMA environment. It’s certain to be an unforgettable night.”

Are you excited to see Klum host the EMA’S?