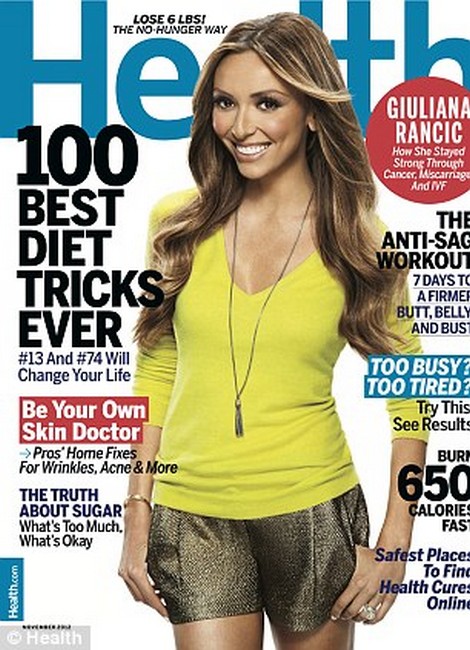 E! news anchor and TV presenter Giuliana Rancic graces the November 2012 issue of Health magazine.  In the magazine Giuliana speaks about how she got through infertility, miscarriage and breast cancer.  Giuliana has been married to Celebrity Apprentice winner Bill Rancic for five-years.  The two have publicly discussed their fertility issues on television talk shows, having tried to conceive since approximately the beginning of 2009.

The couple began in vitro fertilization in March 2010,  and Giuliana got pregnant in the spring of 2010; however, she suffered a miscarriage at nine weeks.  Rancic had an IVF transfer for a second time in November 2010, however the procedure did not result in a pregnancy. When the couple decided to try for a third round of IVF, her doctor recommended a mammogram, which is how she found out she had breast cancer.

Giuliana’s wish to have a child had a happy ending, when she and husband Bill, 41, finally welcomed their son Edward Duke on August 30 via surrogate.  The couple have made it clear that they are not ready to stop and are already planning baby # 2.

Below are some highlights of her interview with Health Magazine November 2012 issue:

The road to baby was a tough one for you. You’ve said you were blindsided by how difficult it was.
It was a big shock! I always say how I chased my career instead of chasing guys. And everybody was patting me on the back. No one ever told me, “Oh, by the way, your eggs change when you reach a certain age.” I didn’t think 35 was old! So when the doctor said, “It’s not as easy as you thought it would be,” it was a real blow. Because I felt so young. I mean, this is a girl who was running six miles a day, and eating healthy, so how can you tell me that I’m not healthy in that department?

So would you have done anything differently?
I don’t think I would’ve frozen my eggs. A lot of people throw that out there, like, “Oh, just freeze your eggs.” That is major. It’s surgery! As a 25-year-old making not a lot of money, you’re not just going to go through all that and freeze your eggs.

After finding your cancer, did you know what your next steps would be?
No way, are you kidding? I was shell-shocked. I thought I was going to die. I didn’t know that if you find breast cancer early enough, you have a 98 percent survival rate. I went to work right after finding out and did E! News. I recently watched that episode and I don’t know how I pulled it off. Afterward, I ran into my dressing room and started hysterically crying. Bill was really the one who had to pick me up off the floor and say, “Hey, we’re making a plan here.” He took over.

To read more of the interview head over to Health Magazine HERE!