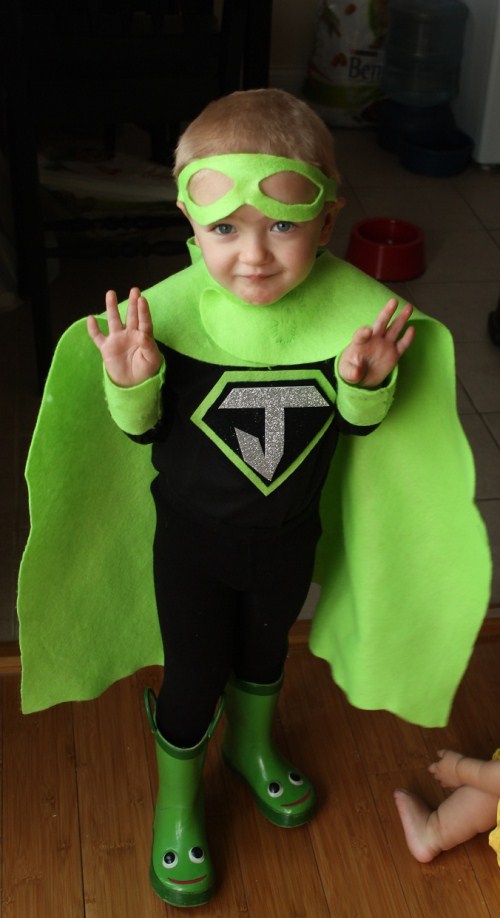 I get frustrated with store bought costumes, they seem to get so cheap as the years go on. Growing up, my mom always made our costumes, same with my husband, so of course our kids would get nothing less! Due to my son’s sensory processing disorder, costumes are a tricky subject (tricky, hehe! get it?). So I did my best to make sure that his costume was something that didn’t require ‘head gear’ to get the point and was something very close to his regular type clothing so he wouldn’t be turned off by the costume!

My darling son decided, on his own, that he wanted to be Super Boy! Which a big step up from his original choice of a porcupine! So we started off with our base of the costume, girls thick black tights ($3) and a black long sleeve shirt ($4).  Then I headed my happy butt to the local fabric store! Let me start this by saying, I HAVE NO sewing experience and EVERYTHING sewn on his costume was done by hand and NOT pretty haha! I let him pick out his fabric, I used felt as it was cheap! He picked electric green and I think I got a yard of it (folded over) for $3. I found a very simple cape tutorial online and got to cutting! I also got two capes out of the amount of fabric I bought. I did two different styles and let him pick which he wanted and he picked this one b/c it didn’t touch his neck like the other one! I secured the neck of his cape with a little bit a Velcro, hand stitched on. To make the super J symbol on the shirt (and there is one on the back of the cape) I bought several pieces of pre-cut felt. I got bright green, black and a silver foam sheet. If I remember correctly it cost me less than $4 to get all the pre-cut sheets, they’re very cheap! From there I simply cut away and used glue to attach the layers of the super J symbol. The green felt I got was sticky on one side so that I

just stuck to the T-shirt (which is great b/c it will also come off making it so we can re-use his shirt!). Once that was secured onto the shirt and cape, I made him his very odd looking face mask. I knew this would be a long shot so I didn’t spend too much time on it. When we’ve tried his costume on, he will only wear it a few minutes but that’s okay! We were going to do undies on outside of his pants but he just couldn’t handle that one so we scratched it. The bright green boots we already had so that worked out perfect! I later added some silver stars to the boots and his head band since I had left over silver foam. So in a nutshell, that’s my home made costume and if had I had a better idea of what I was doing it would have literally taken me less than an hour to complete! This is also a great last minute costume idea for those who need something quick! All this fun for under $14 and if you already had some of the components like I did it could essentially be even less!!