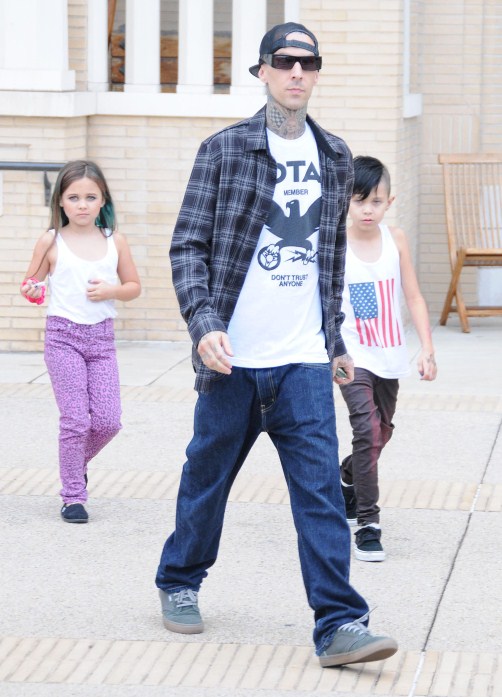 Travis Barker and his kids Alabama and Landon were spotted shopping at Barneys New York in Beverly Hills, Ca on Wednesday. The rocker dad walked in front of his children as he told the paparazzi to back off.

His two children seem to be taking after his style.  Eight-year-old Landon looked cool with a dyed black hairdo while wearing black shaded skinny jeans and an American flag tank. Six-year-old Alabama sported black makeup with green streaks in her hair and dressed in purple leopard print jean and white tank.

The Blink-182 drummer has changed his lifestyle after a recent cancer scare.

“I had pre-cancerous cells in my throat, right there that was a game changer. I quit everything immediately. It’s made a difference. I feel 100% where as before I’d think, ‘I feel good but last night I went hard.’ It’s a lot more consistent like this, you don’t really have good and bad days, you don’t wake up blaming something on a hangover or you did this too much or that too much.

Barker feels lucky to have been given the wake-up call.

“Some people don’t get that wake-up call, they just go straight to the bad news, so it’s a second chance.”