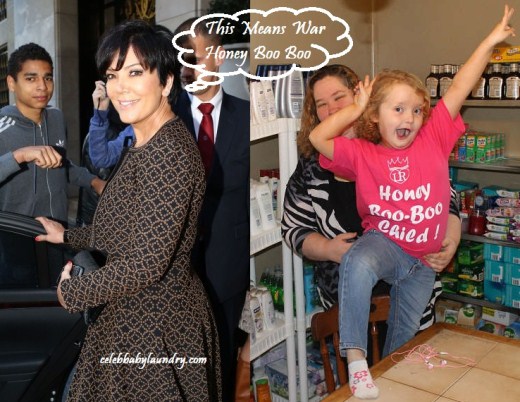 According to Radar Online, Jenner hates that the Honey Boo Boo family are stealing the spotlight from her family and their show.

“To say Kris is not a fan of Here Comes Honey Boo Boo is an understatement,” the source reveals.  She thinks the Thompsons are classless, unlike her family and can’t understand why America is so fascinated by them.

“The show has become bigger than Keeping Up With The Kardashians, and Kris is starting to feel threatened by its success.

The Kardashian mom believes that June is a horrible mom for putting her daughter through beauty pageants and thinks she is exploiting 7-year-old Alana to make money.

“Kris especially has a strong dislike for June, claiming the beauty pageant world is vile and that June is a bad mom for ‘exploiting’ Alana in that way.

“Kris think it’s all a ploy to make money, and says she sees through it and thinks it is absolutely disgusting.  Although it’s like pot calling the kettle black – you could say that Kris does exactly the same with her family,” the source added.

The reality TV show was watched by 2.9 million fans – doubling the figures of those tuning in to watch Paul Ryan’s acceptance speech.

Car Seats On Shopping Carts: A Big No No