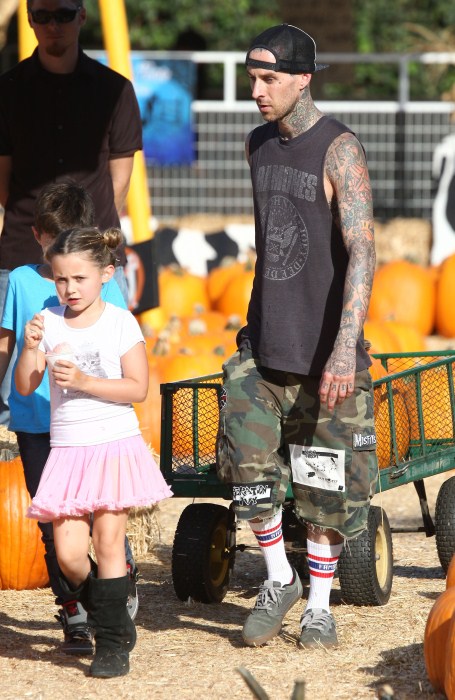 Travis Barker was spotted taking his kids Alabama and Landon to the Mr. Bones pumpkin patch in West Hollywood, CA on Thursday.

The Blink 182 drummer wore his usual rocker getup as he pulled a wagon with their pumpkins. Alabama wore a frilly skirt and a top with a cat print on the front while enjoying a snow cone. Alabama wore a blue shirt and jeans as he stuck close to his dad.

Barker to switched to vegan diet after suffering a health scare earlier this year.

“I had a health scare earlier this year,” the musician told Music Radar. “I went to the doctor and found that I had eight ulcers in my stomach, and then I found that I had a condition from it, from excessive smoking. I [also] had pre-cancerous cells in my throat. Right there, that was a game changer.”

Travis gave up smoking, drinking and meat and embraced a rigorous workout regimen to shock his body back to health.

“I quit everything immediately. It’s made a difference,” says the father of two. “I feel 100%, whereas before I’d think, ‘I feel good but last night I went hard.’ It’s a lot more consistent.

“You don’t really have good and bad days, you don’t wake up blaming something on a hangover, or you did this too much or that too much. It was a good, positive change. I definitely feel better than years ago when I was smoking heaps of weed and drinking.”

Rachel Zoe: Skyler “Makes Me Laugh From Morning To Night”

My Kids Are Little Angels For Other People!