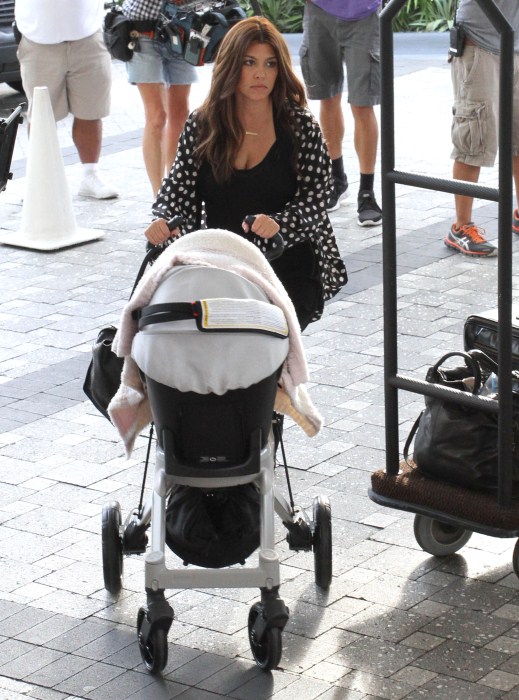 Kourtney Karadashian arrived at an exclusive Miami hotel with her two children Mason and Penelope on Saturday.  The reality star was joined by her two sisters Kim and Khloe.  Kim wore a black mini dress with black boots as she took Mason out of their car and carried him into the hotel while a jean wearing Khloe set up a stroller system for Penelope.  Kourtney who also wore black then took control of the stroller and made sure the pesky photogs stayed far enough away from Penelope.

The sisters are staying at hotel before they move into a $6 million Miami mansion for the next three months.

According to TMZ, they will be filming their next spin-off show, Kim and Kourtney Take Miami at the mansion. The property is a $5.8-million-dollar Mediterranean style mansion which boasts 6 bedrooms, 6 1/2 baths, over 5,000 square feet, a pool and an attached dock with room for a 100′

The first time the Kardashians filmed their spin-off show in Miami they stayed at hotels because they believed it was the swanky thing to do.  However, this time Kourtney has two children a would prefer to stay in a big house.