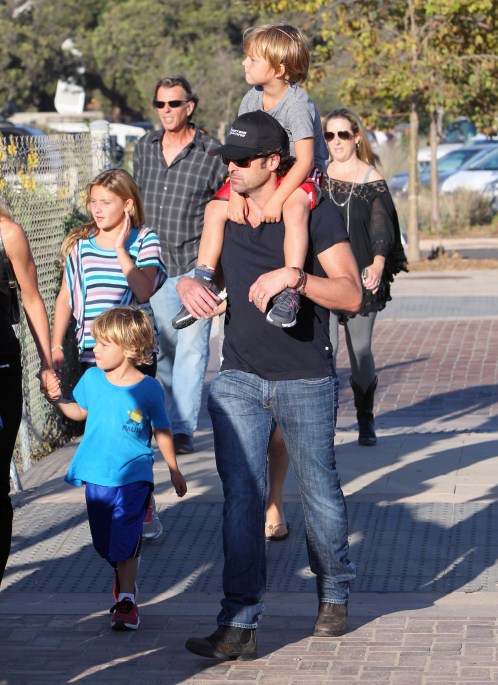 Grey’s Anatomy star Patrick Dempsey was spotted enjoying a day with his family at the fair in Malibu, Ca on Friday.  The yummy daddy who wore jeans and a black shirt was joined by his wife Jillian, 10-year-old daughter Tallulah Fyfe and their twins 5-year-old twins Sullivan Patrick and Darby Galen.  He carried one of his twins on his shoulders while the other held his mom’s hand. Tallulah followed behind.

New spoilers for the ninth season of Grey’s Anatony hit the net on Friday. It was revealed that Dempsey’s character Derek survives the plane crash that took place at the end of season 8, but the injury he suffers is going to play a major role in his life.

“How do you remain effective and relevant when perhaps you may never operate again? … Or if you are going to operate again, perhaps you want to be the same kind of surgeon you were again with the same skill,” executive producer Shonda Rhimes told TV Line when speaking about the struggle Derek is going to have to deal with in the upcoming season.

Patrick Dempsey’s Kids Ask Him Why He is On TV