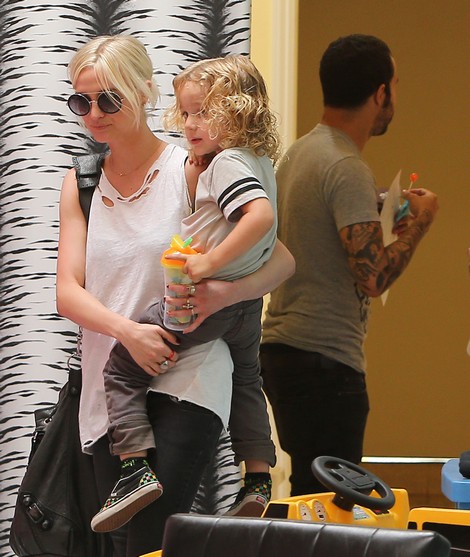 Ashlee and Pete seemed to be getting a long great. They had the workers hold up a sheet to block the view of Bronx’s haircut to stop the paparazzi from snapping pictures.  They wanted the event to be private!

Ashlee filed for divorce from Pete in 2011 after 3 years of marriage citing “irreconcilable differences”. She asked for joint custody and primary physical custody of their son, Bronx, along with spousal support.  Some say the real reason they split up was they were too young to get married.  At the time it was said that Pete was not happy about the divorce.

Pete has since moved on and is dating Meagan Camper.  Pete has been dating the model since September, but things have quickly become serious between the pair and she seems to play an active role in Bronx’s life.  Ashlee is now dating Boardwalk Empire star Vincent Piazza

It is refreshing to see a celebrity couple who can put aside their differences for the sake of their children.  Bravo Ashlee and Pete!