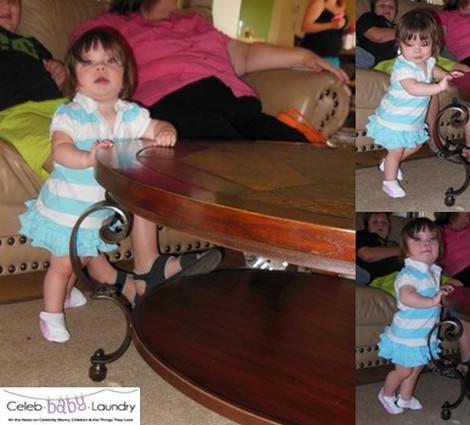 Ava is on vacation this week in Prince Edward Island and Ava is heading out for a day on the Charlottetown Board Walk.

Prince Edward Island, a maritime province in Eastern Canada is the smallest in the nation in both land area and population. The island has a few other names: “Garden of the Gulf” referring to the pastoral scenery and lush agricultural lands throughout the province; and “Birthplace of Confederation”, referring to the Charlottetown Conference in 1864, although PEI did not join the confederation until 1873, when it became the seventh Canadian province.

Ava is all ready to head out for a fun day wearing her Ralph Lauren blue and white striped polo dress.  Ava teams off her dress with Puma Lil Wrap Baby Soft Sole Pink and White Runners to keep her feet comfy for a day on the go.

Come back next Tuesday to check out another hot baby style!