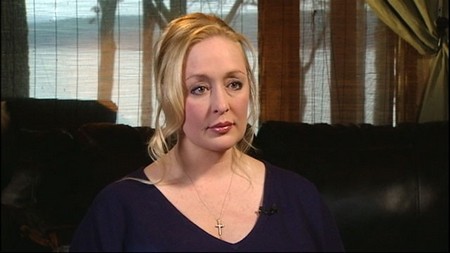 The country singer Mindy McCready has fled with her 5-year-old son Zander over state lines recently. She claims her mother abuses her son by beating him with a wooden spoon and “exposing him to a bizarre religion involving prophets, demons and ghosts!”

McCready says the reason for abducting her son was to protect him from her own mother, Gayle Inge, who has been his legal guardian for the past four-and-a-half-years. Allegedly, Gayle has been exposing McCready’s son to a religion called “Treasures of the Snow”. She tells ABC News, “My mom believes that she can astrally (sic) project herself, meaning she can be at five places at one time. They were encouraging my son to go around with them to churches and stand up on stage and, you know, scream gibberish, and then everyone act like it was something amazing that he said.”

The images of Carrie are playing over and over in our heads, with Piper Laurie being stabbed (mentally) by a crazed Sissy Spacek. This is one of the oddest stories ever!

McCready said to ABC, “The thing about it is no one knows my story. I told them ‘Do you know what it’s like to have one minute with him after having four years without him?’ Not giving up one minute for anything or anyone.” McCready also says that her son Zander is her reason to be alive and that she’s fighting her hardest to win back custody. “I couldn’t imagine loving something so much that instead of wanting to just lay down and die, I wanted to stand up and fight.”

We do not know whether the allegations are true or not, but Gayle did speak out about the drama and said, “I have been Zander’s guardian for four-and-a-half years. There has (sic) been all kinds of scrutiny. He has never been abused in our care.”

McCready hopes she’ll have Zander back for Christmas celebrations and says, “I believe everybody makes mistakes and everybody grows up. Zander saves my life and every time I want to let go and give in, I remember what he did for me. He saved my life.”

Wow, we never knew there was a religion that’s weirder than Scientology… Let us know in the comments below if you think Gayle Inge is dodgy.