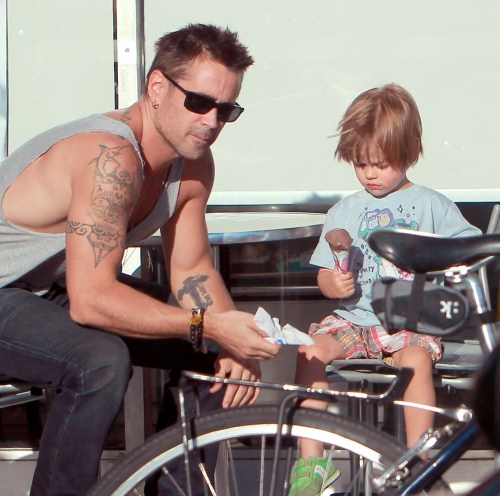 Is Colin Farrell ready to part ways with his bad boy image?

The ‘Total Recall’ actor was spotted taking his two-year-old son Henry out for an ice cream cone at Baskin-Robbins in Los Angeles, Ca on Monday.   He certainly looked like a cute daddy as he cleaned and fixed Henry up after eating.  Afterwards, the duo stopped at a local newsstand where Farrell bought Henry a children’s book.

Farrell who has children James and Henry recently admitted he was not ready to be a parent when his first son was born.

“People say having children changes you, doesn’t it? Unfortunately not. You can go around the world and see stories where it doesn’t change people. You have to allow it to invite the change in.

“So the first three years of James’s life was me going ‘I’m not going to change, I’m just going to be his friend — we’re going to be pals.

“But that didn’t work out so well. And then based on a couple of life changes I made myself, I thought, ‘Why am I fighting change?’”

Colin Farrell On Fatherhood: “I Don’t Know What I’m Doing, And That’s A Very…