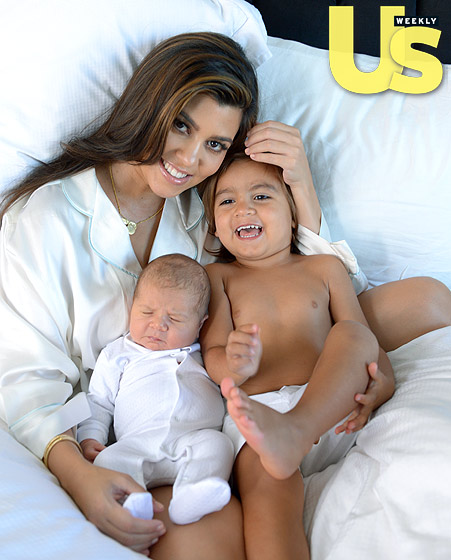 Kourtney Kardashian and Scott Disick’s newborn daughter, Penelope Scotland makes her debut on this weeks cover of Us Weekly.

“Nothing could prepare me for how hard I fell in love with her,” Kardashian told of Penelope. “With Mason, we have such a love affair that I never knew existed. I didn’t expect it to happen again. It’s such a magical feeling.

Kardashian’s “delivery was really quick,” Disick recalled. “In the months before she gave birth, we would pray that she’d have a good one, and she did. Kourtney’s mother was super supportive. It was cute to see her and hold Kourtney’s hand and get her through it.”

And of course the whole delivery was caught on tape!

“We did tape it with our cameras, and Scott was taping some of it on his iPad,” Kardashian explained. “I could see cameras from all angles!”

According to Kardashian, her son Mason is adjusting well.
“He was so excited,” Kardashian said. “He’s adjusting to the whole thing so well. He calls her ‘sister.’ He gets mad if anyone calls her anything else. People will be like, ‘What’s your sister’s name?’ And he’ll say, ‘Sister!'”

“He’s in love with her,” Kardashian added. “He’s always asking to hold and cuddle her.”