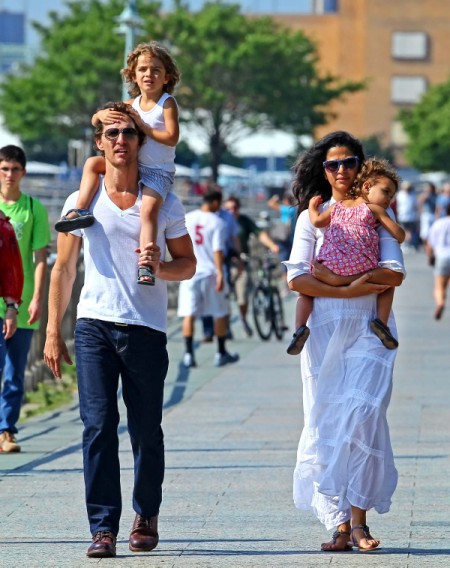 Matthew McConaughey and wife Camila Alves spent some quality time walking along the Hudson River with kids Levi and Vida yesterday. The couple just married and announced they are expecting their third child. It might be a difficult pregnancy for Camila since while she’s gaining weight, Matthew is going to lose a lot! He just signed up to play a character with HIV in the upcoming movie The Dallas Buyers Club. The actor is set to portray real-life American cowboy, Ron Woodruff, who smuggles life-saving drugs across the Mexican border after contracting the disease during the 1980s.

Matthew is no stranger to a gym but is finding the weight loss a bit difficult at the moment. He told Larry King’s new Ora TV web series, “It’s a bit of a spiritual cleanse, mental cleanse. (I’m) drinking a lot of tea. It takes a while for your body to understand that it has to feed off of itself and that you’re not going to give it something else from the outside.”

I think it would be hard for me to watch my husband lose all that weight when I was gaining – even if for his job! What about you?