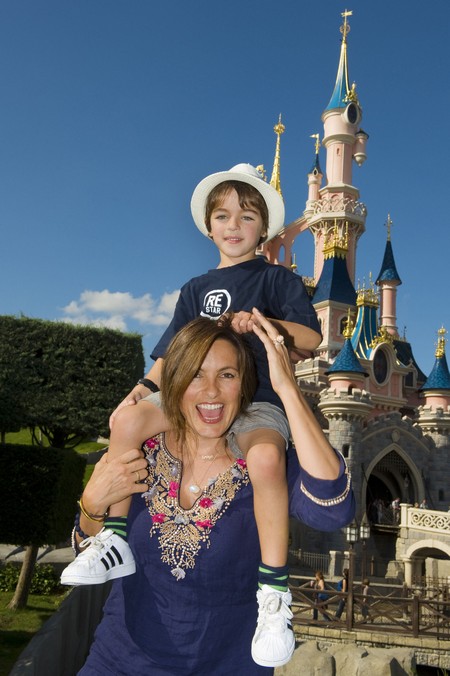 Mariska Hargitay’s name has been used as a form of “thank you” by Mike Meyers in Love Guru. She also catches criminals on Law and Order: SVU on a weekly basis. Harigitay’s son Andrew Nicolas, who is turning one this month, is taking the beach over at their house in The Hamptons.

“He’s crawling all over town!” Mariska exclusively told People magazine. We just imagined little Andrew going on his own for a drink of milk at the local restaurant, driving in a little car and listening to baby tunes. We couldn’t help but utter a resounding, “Cuuuute!”

How does Mariska keep tabs on her three kids, which includes August (6) and Amaya (15 months)?

She pops them all in the pool!

She told People magazine, “August is in the pool like 10 hours a day. What I do with Amaya is I blow out bubbles through my lips. And she thinks it’s so hilarious so she’ll do it too. Andrew has a round floatie that he sits in, and while he’s in there, I’ll hold Amaya and do the bubbles.”

Her younger kids are still getting used to the labels of water babies, but Mariska says they’re fearless in the water, “I make sure all of them go in because I don’t want them to ever be scared of the water. My kids are all fearless and they love the pool!”

How cool is that?

Not only is their mom an awesome actress, but she also does amazing work for the Joyful Heart Foundation, which focuses on domestic violence and abuse.

Another Fun Outing In NYC For Katie Holmes And Suri Cruise