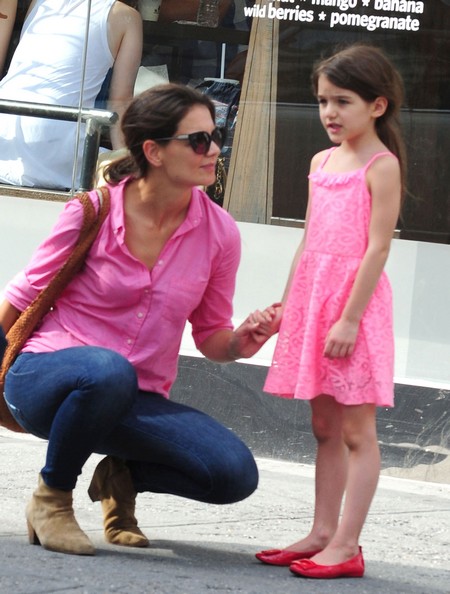 Once upon a time, a little girl lived with her actress mother and her off kilter father. This little girl wore the most beautiful dresses in all the land. Her daddy and mommy were very wealthy people and lived in a mansion, so this little girl received everything her heart desired. She started wearing lipstick, with her mommy and daddy’s consent. A horror film ensued and the little girl turned into a man-child.

Suri has a wardrobe worth $3 million dollars. She sported designer handbags, shoes and dresses. Some of these she only wore once or twice. Katie Holmes divorced from Tom Cruise and Suri’s lifestyle came crashing down like Bernie Madoff’s empire.

According to Reveal sources, Katie will no longer accept clothes from fashion houses and is starting to enforce a more conservative dress sense in Suri. “Katie has been returning unsolicited gifts and loans from designers for Suri since she arrived in New York, which is to be her home base now, far away from Tom,” a source told the magazine. “She’s issued instructions to remove Suri from all freebie lists. She’s also put the word out in LA to stop any mini-me diva products being sent her way.”

Sources blame Tom for playing dress-up with Suri, but Katie is having none of it anymore.

All that inappropriate dress up and make-up was down to Tom and Katie’s key word now when it comes to Suri is ‘normal’. Tom loved to spoil Suri and indulge her, but Katie has other ideas.“

Suri is going to a Catholic school soon, so this might cease the incessant urge to be the toddler with a tiara.

Chris Hemsworth Strolls With His Family Before Turning Back Into Thor