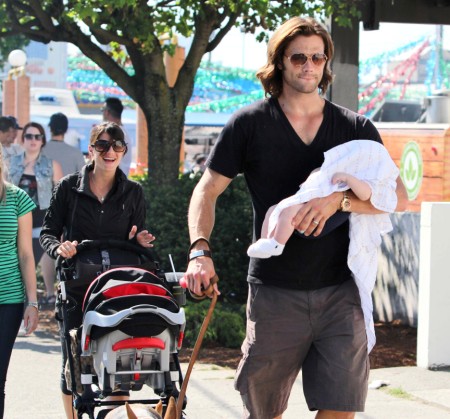 Supernatural star Jared Padalecki and his co-star wife Genevieve Cortese took their son Thomas Padalecki  to the Vancouver Food Truck festival in Vancouver, Canada yesterday. Adorable, right? Check out Thomas’s sunglasses. How are his parents keeping them on his face though? That’s tough to do. And even though Jared and Genevieve were in Canada, they were still showing the U.S. some love. Thomas was sporting an awesome U.S. Olympics shirt!

When did Dean from Gilmore Girls get so ripped? I’m sorry, I know Jared’s moved on to Supernatural but he’ll always be Dean to me. God I miss that show! Check out his arms! Dude’s been in the gym apparently and he’s pulling a Chris Hemsworth with the baby cradlin’. I’m not going to hate on it. At least Jared has a stroller nearby and he’s not clutching that baby all over town like Hemsworth!