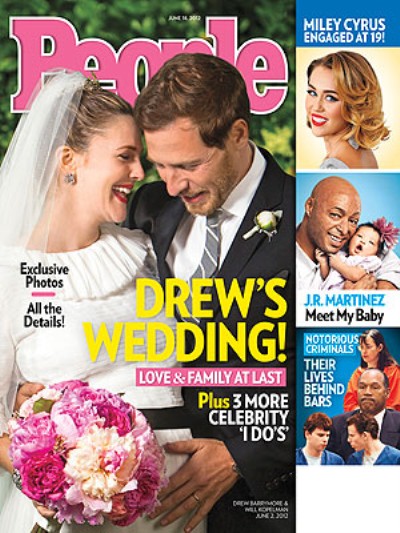 A pregnant Drew Barrymore said “I do” to Will Kopelman over the weekend. The couple were married at Drew’s $5.7 million Montecito home. People magazine snagged the couple’s first wedding shots for this week’s cover and had the inside scope on the big day. “The day was perfect,” Drew told the magazine. “Everyone we love and care about was there. It was as fun and meaningful as we ever could have hoped.”

Drew and Will kept it low key “in the backyard wedding” with a traditional Jewish ceremony and family and famous friends such as Cameron Diaz, Reese Witherspoon and Scarlett Johansson present. Karl Lagerfeld designed her Chanel dress that had to work around that growing baby bump. Drew had said she wanted to get married before the baby was born and before the bump grew too big! Congratulations you two! Drew looks absolutely stunning, don’t you think? I don’t know if it’s the happiness or the baby glow, maybe it’s both!

Kendra Wilkinson Will Not Be Eating Her Placenta!