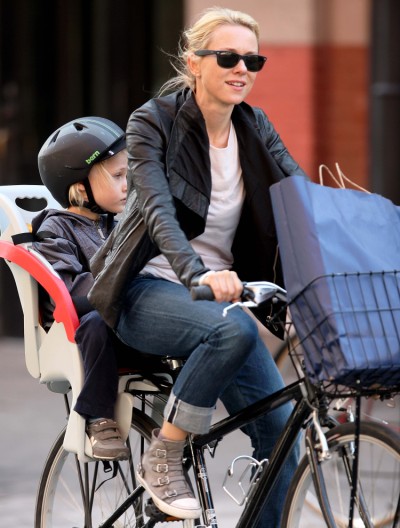 Take note young mothers. This is how you lose the baby weight! Naomi Watts was seen biking her son Alexander (Sasha) around Soho in New York City yesterday. Naomi has one other son, Samuel, with partner Liev Schreiber.

I love this couple. They don’t let the cameras stop them from enjoying family time outdoors. They rival the Garner-Afflecks in extracurriculars for sure!

Naomi better take advantage of these lazy days while she can because she’s set to play another famous mother of two young boys on screen. She’s been picked to star as Princess Diana in the upcoming biopic, Caught in Flight. The movie will focus on Diana’s romance with heart surgeon Hasnat Khan.

Those are pretty big shoes to fill but I have a feeling Naomi will do splendidly!