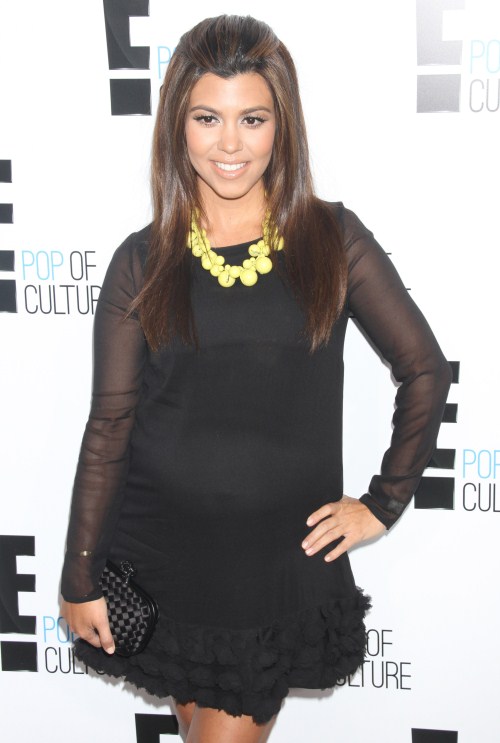 Kourtney Kardashian celebrated the upcoming arrival of her second child with friends and family during a weekend baby shower.

Kourtney’s mom Kris Jenner, hosted the event at her home in Hidden Hills, Calif. with help from party planner Sharon Sacks.  The shower began a little after 11:30 a.m., with Kourtney making her grand entrance just short of noon.

“Kourtney’s shower was so nice!” an eyewitness tells Life & Style. “Her mom and sisters were there, of course. They talked, laughed, and played games. There was a bar and lots of different types of foods and desserts, including sushi and little sandwiches. She seemed happy and excited earlier in the day before the shower. Her son, Mason, was there, too.”

Pinks were the color of the occasion as Kourtney is having a baby girl.

“Flowers were blush-pink peonies, pink Dutch hydrangeas and garden sweet peas in pink-and-fuchsia containers,” the eyewitness reveals to Life & Style. “The theme was all pink and whites. Petals LA did the floral arrangements.”

“There were about 90 people at 10 tables,” a second source tells.

Kourtney’s baby girl is certainly going to be spoiled too!

“Kourtney got lots of gifts from Bel Bambini,” the eyewitness tells Life & Style.

The brunette beauty registered with the store and asked for items, including a $349 video monitor set, car seat, embroidered bibs and teething toys.

“Multiple women arrived bearing numerous gifts for Kourtney’s new baby,” a second eyewitness says. “At one point, a Toyota van drove up to the property and numerous people rushed over to the car to help a blond female carry a huge gift, in black-and-white wrapping paper and a big red bow, into the house.”

But no one left empty-handed.

“Kourtney and her family had gift bags for all the guests,” the first eyewitness says.

Jay-Z Taking Time Off From Music To Be With Daughter

Jennifer Garner and Seraphina enjoy day at the park (Photos)