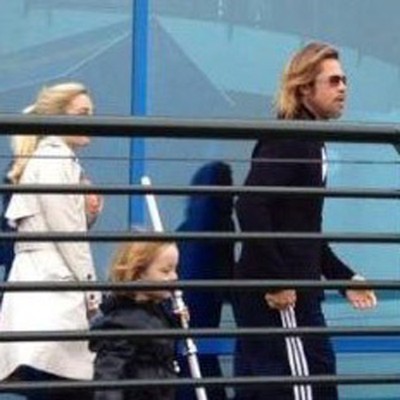 Brad Pitt, Angelina Jolie and all the kids are currently in London where Jolie is getting set to start filming Disney’s Maleficent. While there, Pitt decided to take the family on a trip to Legoland. I’ve only seen pics of Brad and Knox at the excursion but a source tells People that all the Jolie-Pitts were there to enjoy.

“The whole family came and appeared to have a really wonderful time,” says the source. “Both Brad and Angelina were very hands on and relaxed, helping the children to operate the rides and have a good time. They seem very much in love, too, and a really happy family.”

This isn’t the first time the family has visited this Legoland in Windsor, England. They were there this time last year. The Jolie-Pitts have an affinity for legos. Jolie also took Maddox, Pax and Shiloh to Berlin’s Legoland in February.

The London trip is proving to be an exciting one. Not only did the famous family visit the petting zoo, Odds Farm, but Us Weekly reports they even met up with Jolie’s pal, Russell Crowe. Crowe is in London filming Les Miserables and invited Jolie and the family to come check out the film studio.

“Russell and Angelina caught up at the F Stage, where Les Mis is being shot,” the insider told Us. “The kids were all fitted with [protective] ear defenders because it’s quite a loud sound stage. It was really exciting for the children to see the movie being shot.”

Can you believe the kids still get excited about that? Cute!

Kristin Cavallari and Jay Cutler are having a boy!