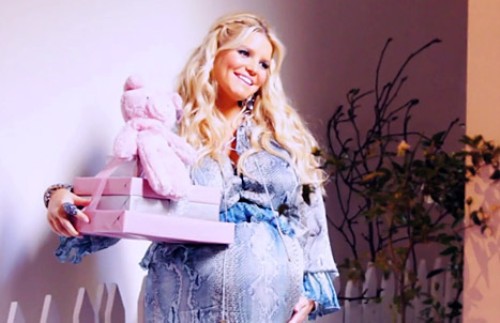 I’m sure Jessica Simpson is looking very forward to a gift from the stork right about now but, in the meantime, she’s letting her fans watch as she opens a wealth of other presents at her baby shower.

The Charlotte’s Web themed shower took place on March 18 but Jessica just posted a video from her official website on Thursday. She posted a few pics of herself looking radiant and wrote the captions, “Creating a family is the best thing I’ve ever done” and “I really hope I can be half as good a mom as my mom has been to me.”

According to Us Weekly, it was a star-studded affair which included Jessica’s friends Jessica Alba with her daughter, Haven, and Ellen Pompeo. Naturally, Jess’s little sister, Ashlee, brought son, Bronx. “It was a kid friendly shower with many of her friends bringing babies,” a source told Us Weekly.

The guests snacked on Jessica’s favorite southern delicacies including  fried Oreos and Twinkies. That doesn’t sound like the healthiest fair for a mother-to-be but, at this stage in the game, Jessica should just enjoy herself! Sources estimate she could have the baby as soon as next week!