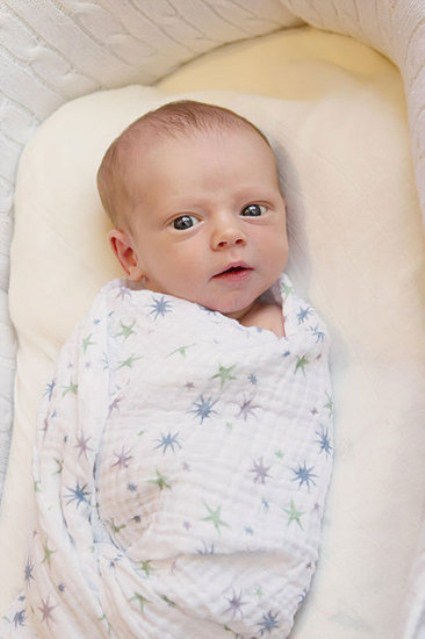 Hilary Duff and husband Mike Comrie have released a picture of their two week old baby boy. So without further ado here is Luca Cruz Comrie. What a gorgeous bub.  He looks a lot like his mother!

The actress and singer has been keeping her Twitter followers up to date with Luca almost every day. So she decided to give the world a glimpse of her little bundle of joy. The 24 year old tweeted ‘Baby Luca, 2 weeks old‘. He’s all wrapped up but wide eyed and already a natural in front of the camera. Something he’s inherited from his photogenic Mom.

Hilary is quite a prolific tweeter. Her fans were able to follow her pregnancy as she tweeted about cravings and her growing baby bump. Now she’s sharing her post pregnancy fitness routine ’20 minutes on the elliptical seems like an eternity!!! What the hell...’. One of my personal favorites was ‘You should have seen what I looked like last week. Eek surprised I still have a husband!! It was time to throw them heels on 😉 guurl.’ There was even a tweet about her long overdue trip to the hair salon ‘Just got my hair did…Feelin fresh!’ Something we can all relate to.

Jessica Simpson: My First Days As A New Mom (Photo)