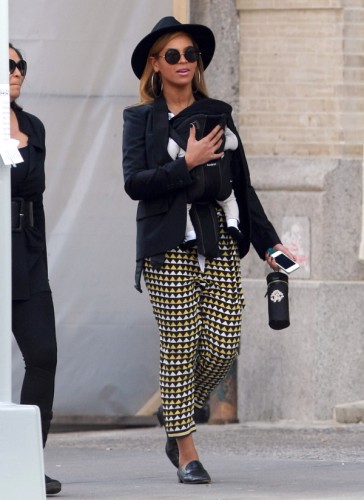 She might be voted the Most Beautiful Woman in the World, but even Beyonce has to work for it. In the newest issue of People magazine, the grammy winner and Jay-Z’s better half, opens up about the changes in her life since she gave birth to 10-week-old daughter, Blue Ivy, and the efforts she’s making to get her pre-baby body back.

Beyonce admits that breastfeeding little Blue is how she has worked off most of the baby weight. Now, she is following a strict protein-based diet to combat those last nagging pounds. In addition, she’s hitting the gym three times a week for 90 minutes, doing a combination of running, dancing and crunches.

‘I’m definitely softer, but I feel my body bouncing back,’ she says.

But it’s not all work and no play.  Beyonce’s discovered a newfound love of flat shoes and says she feels more beautiful than she’s ever felt before and has never “felt so connected.”

Brooklyn Decker wants to adopt a child with special needs