Reese Witherspoon Is Pregnant With Her Third Child (Photo) 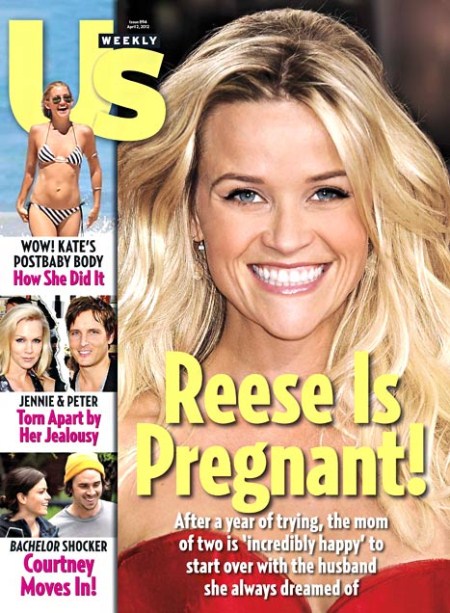 Congrats to Reese Witherspoon and Jim Toth!  Us Weekly is claiming the two are expecting their first child together!    Reese is thrilled to be starting over the Jim Toththe husband she always dreamt of.

As multiple sources confirm exclusively in the new Us Weekly, out now, the Oscar-winning actress is pregnant with her third child, and her first with second husband Jim Toth, who she wed last March at her $7 million ranch in Ojai, Calif. after over a year of dating.”Reese is right around 12 weeks,” one source explains, adding that the This Means War star is “not planning to announce it.”

The baby-to-be will join older siblings Ava, 12, and Deacon, 8, Witherspoon’s kids with first husband Ryan Phillippe, from whom she split in 2006 after 7 years of marriage.  Pals of Witherspoon and high-powered CAA agent Toth, 41, aren’t shocked by the happy news. “Reese and Jim have been trying to get pregnant,” one pal says.

Reese married talent agent Jim Toth in March 2011.  She has 2 children from her first marriage to Ryan Philippe.