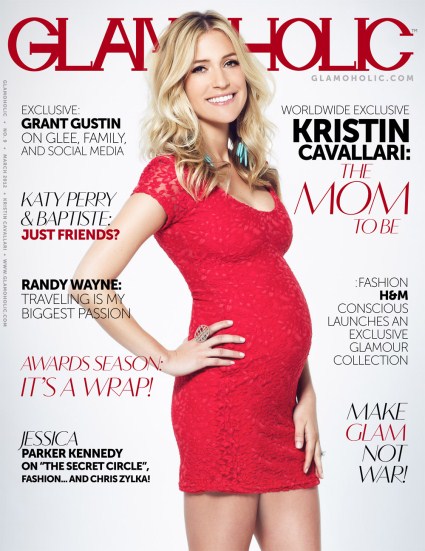 Mom-to-be Kristin Cavallari is glowing. The one time star of The Hills is expecting her first child with fiance Jay Cutler this summer. The 25 year old has opened up to Glamoholic about how she’s dealing with her baby bump, impending motherhood and  plans for the future.

So how is she coping with pregnancy? “I am actually enjoying it which may sound crazy to some women, but I’ve had a really easy pregnancy. The first couple of months I was tired, but I didn’t have any morning sickness. Which, I’ll take being tired any day over throwing up.’

Kristin has long been a party girl. If you watched Laguna Beach you’ll know what I’m talking about – so moving into motherhood in her mid 20s did take some people by surprise  ‘It’s so crazy to look at your life and see how far you’ve come. I always wanted kids, but I always thought I would have kids later on in life, maybe when I turn 30.’ She admits her and Jay ‘weren’t trying to have kids’ but they weren’t not trying either…’We left it up to fate‘…

So does Kristin envisage more kids down the track? ‘We’re talking about the possibility of having another kid right away and then getting married so we can have two kids close in age. We want four kids, so we’re thinking maybe have one more, then get married, then have two more, but we’ll see, it all depends on how the first one goes.’

It sounds like Kristin has it all worked out!

Victoria Beckham: “It’s All About The Children.They’re The Most Important People!”