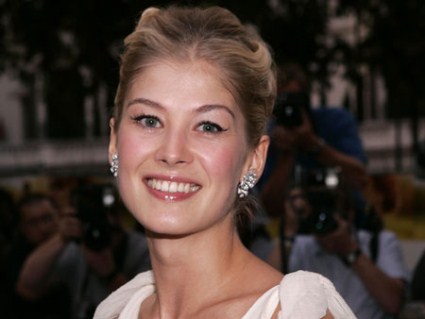 A big congratulations to the gorgeous British actress Rosamund Pike. The woman best known for playing a Bond Girl in Die Another Day and partner Robie Uniacke are expecting their first child together. And she doesn’t have long to go – it’s been revealed she’s seven months pregnant! So their new addition will be arriving in April.

33 year old Rosamund and Robie have been together since December 2009. While the actress prepares for first time motherhood her boyfriend knows a thing or two about fatherhood. Robie already has four children. The pair are not engaged. A friend has told The Mail on Sunday ‘They are talking about getting a family home when the baby is born, although marriage isn’t on the cards. Rosamund is so excited about the baby, and she’s planning to take a break from work. She and Robie are very happy together. Robie is a great guy and adores her‘.

Rosamund has made no secret of the fact she wanted to be a Mom and she had a least two kids in mind. She once said ‘As an only child, you’ve never known anything else. But I definitely know that I would like my child to have brothers or sisters. But I haven’t got a child yet, not yet obviously‘.

While the actress is learning how to change diapers and having plenty of sleepless nights with a newborn we’ll be able to see her on the big screen. She’s the female lead in the new Tom Cruise movie One Shot.