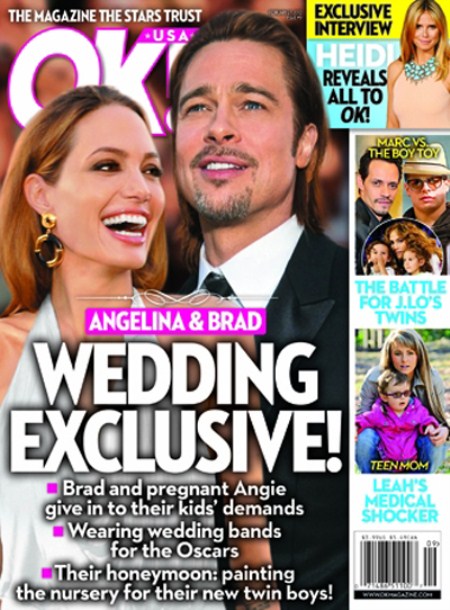 Reportedly, with twin boys on the way, Angelina Jolie & Brad Pitt, who have been together for six years, have finally given in to their children’s demands and are planning to tie the knot this summer “in a small but stylish ceremony at their 16th-century French château.”

“Brad and Angie have kept this quiet, and they’re talking about how and when to announce it,” said an insider to OK!. “They really get a kick out of teasing people with this whole thing.”

No kidding! Although rumors of a Brangelina wedding have plagued the famous couple ever since they first got together in 2005, insiders insist that, this time, it’s really happening. Reportedly, Brad and Angelina may even wear some sort of wedding bands at the Oscars and will spend their honeymoon, painting the nursery of their rumored forthcoming twin boys.

Although Brangelina first insisted that they wouldn’t get hitched until gay marriage became legal throughout the U.S. (which is still quite a ways off,) the magazine cites a recent interview Brad gave as evidence that the couple is backing away from that position and is planning on getting married more imminently:

“We’d actually like to [get married],” the 48-year-old actor revealed. “We made this declaration some time ago that we weren’t going to do it till everyong can. But I don’t think we’ll be able to hold out. It means so much to my kids, and they ask a lot…It means something to me, too,” Brad added, “to be in love with someone and be raising a family with someone and want to make that commitment and not be able to is ludicrous, just ludicrous.”

Scott Disick Walks Out On A Pregnant Kourney Kardashian (Photo)

Hilary Duff & Bump Caught Out In The Rain