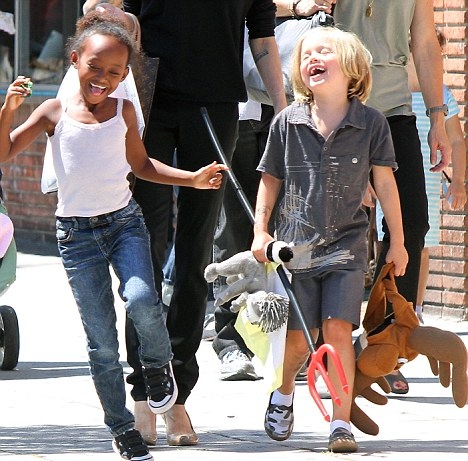 Shiloh Jolie-Pitt has asked her parents to call her ‘Shax’ in order to be more like her siblings: 10 year old Maddox, 7 year old Pax, and 3 year old Knox whose names all end in ‘X’. The 5 year old tomboy feels as if she will be closer to her siblings with the nickname ‘Shax’.

A source is quoted as saying:

“For a while Shiloh had everyone in the family calling her Ben for some reason but she grew tired of that.” said the source.

“These days she’s decided she wants to be known as Shax because Maddox, Pax, and Knox’s names all end in the letter X.” confirms the source. What does Brangelina think about it? The same source added: “Angelina and Brad are going along with it and think its cute.”

It is also well known that tomboy Shiloh always wanted to be a little more like her brothers, and this was confirmed by Angelina:

“Shiloh dresses like a little dude. Shiloh, we feel, has Montenegro style. It’s how people dress there. She likes tracksuits, she likes [regular] suits. She likes to dress like a boy. She wants to be a boy. So we had to cut her hair. She likes to wear boys’ everything. She thinks she’s one of the brothers.” said the actress who looked stunning at the recent Golden Globes. She actually won the top spot of our top 3 best dressed mom of the night, you can view that post here.