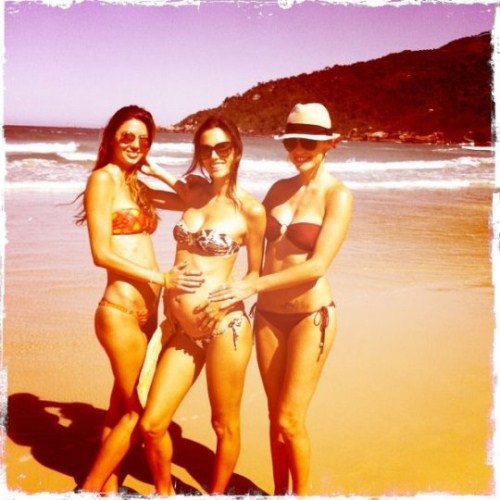 Alessandra Ambrosio who is five months pregnant is showing no signs of giving up her modeling career while pregnant!  It is rumored that Ambrosio will strut her stuff in the Colcci fashion show this Sunday in Sao Paulo, Brazil. She will be joined by Ashton Kutcher who is also the face of the brand.

Alessandra revealed in December that she waked the Victoria Secret runway while two-months pregnant.

When I first found out I was pregnant I thought, “Oh my gosh I don’t think I’m going to be able to walk on the show,”‘ she told.

Ambrosio kept the pregnancy a secret from the company, telling the show’s booker that she merely had put on some weight.

‘I didn’t tell anybody so no one knew at the show that I was pregnant,’ she said.

Ambrosio really redefines the notion of being pregnant!