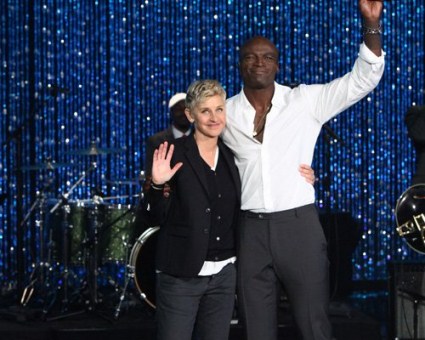 Seal may be preparing to divorce Heidi Klum but he’s told Ellen DeGeneres that his brood of kids remains his number one priority during these tough times. The singer taped today’s appearance on the popular talk show in Los Angeles on Monday.

No one was expecting Seal to show for the chat. It had been locked in before his relationship woes hit the headlines over the weekend. But he decided to face the music and set the record straight about what’s going on. Their interview covering his failed marriage and four children.

The British singer told Ellen ‘I think we were shocked. You go into these things with the greatest intentions when you say ‘I do’ and you say ’til death do us part.’ Those vows hold value. They are not just words… You try and you work through it and the thing that you quickly realize when you are married and you become a parent you do the best that you can‘.

Their kids were never far from his thoughts ‘The thing that I’m most proud about this great woman who I married (and I really do mean that from the bottom of my heart), is that together she has given me four incredible gifts…four beautiful children. She is still, in my opinion, the most wonderful woman in the world’.