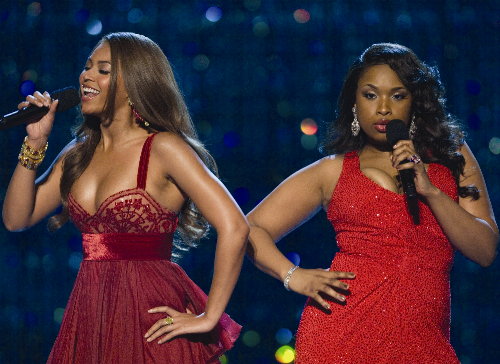 Actress/Singer Jennifer Hudson decided to share a few parenting tips with Dreamgirls co-start Beyonce Knowles regarding super hype baby Blue Ivy. Hudson told beyonce: “”Girl, get your sleep! We talked about this when I had my munchkin. It goes so fast. She’s going to look up and [Blue]’s going to be six months. Next thing you know, she’s going to be walking,”

I think the sleep advice definitely rings true: she is going to struggle if she doesn’t sleep enough. The problem is, especially for busy parents with busy careers like Beyonce and Jay-Z , that they will NOT get their sleep. No matter what you do, unless you have a baby that sleeps all through the night(and those are probably 1% of the total baby population) you’re going to be lacking a lot of sleep for a while. In most cases, instead of trying to fix the issues, I think most parents learn how to deal with situation.

But maybe Hudson knows her stuff since, after all, she does have a 2 year old of her own – a little boy named David.

According to reports, the birth was a natural one – contrary to reports of a C-Section. Blue Ivy was brought home last Tuesday.