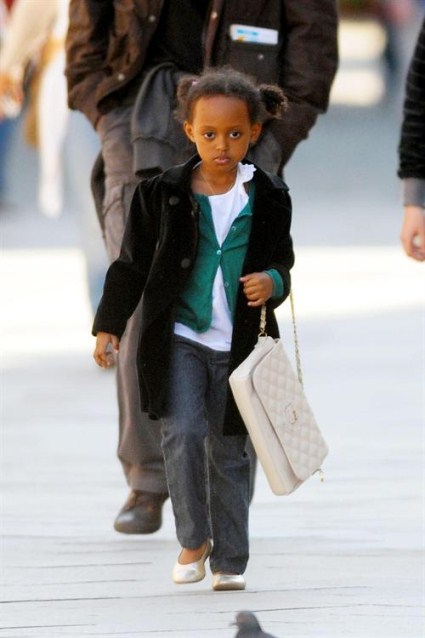 Zahara-Jolie Pitt is growing up fast. Angelina Jolie and Brad Pitt‘s eldest daughter turned seven over the weekend. Her Dad may have won a major award at the Palm Springs International Film Festival but Zahara was the center of attention in her family of eight!

Little Miss Zahara became an instant celebrity when she was adopted from an orphanage in Ethiopa at the age of six months in 2005. Since then we’ve watched her every move and seen her welcome three more siblings to the family – Shiloh Jolie-Pitt (the sisters are particularly close) , Knox Jolie-Pitt and Vivienne Jolie-Pitt. She also has two other brothers Maddox Jolie-Pitt and Pax Jolie-Pitt.

It was love at first sight when the Hollywood superstars met their future daughter according to Zahara’s former caregiver ‘Both Angelina and Brad held her and looked lovely with her. They looked like a happy family, like any other couple that comes and visits. Brad looked very comfortable holding the baby, like a proud father. We are always sad when the children leave because they are our children and we love them but I know she will be going to a very good place.’

Natalie Portman Spends The Day With Her Boys

Angelina Jolie Catches a Flight at LAX With Children