Angelina Jolie Catches a Flight at LAX With Children 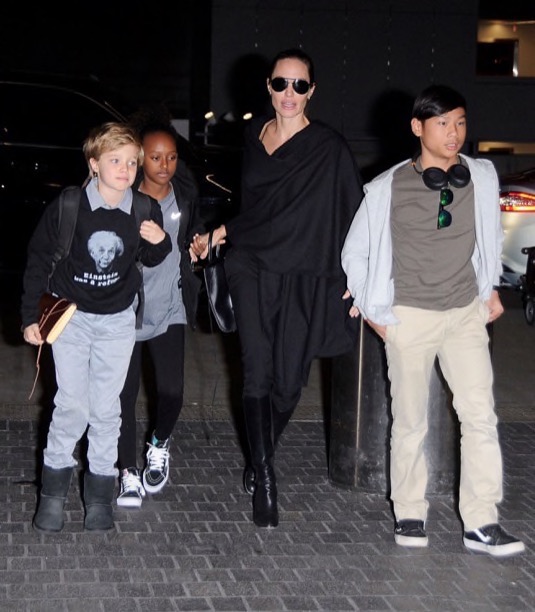 Angelina Jolie and her children Pax, Shiloh and Zahara were spotted catching a flight out of LAX airport in Los Angeles, CA on Monday (March 7).

The By The Sea actress was dressed in a black caftan, black pants and knee-high boots. Pax walked ahead, and Shiloh carried a large book while Zahara held her mom’s hand.

In a recent interview for her voice role in Kung Fu Panda 3, Jolie reveals that their children, Pax, Zahara, Shiloh, and Knox recorded animal noises for some of the pandas in the animated film.

“They were kind of shy,” Jolie told Entertainment Tonight of bringing her children on set. “They don’t really want to be actors, but I didn’t want them to miss the opportunity. They came in, and they had a lot of fun with it.”

This is not the first time the Jolie-Pitt children have gotten involved in the production of their parent’s films.

Maddox is currently helping with research Jolie’s upcoming film First They Killed My Father: A Daughter of Cambodia, while Pax takes still shots on set.