Alyson Hannigan On The Red Carpet 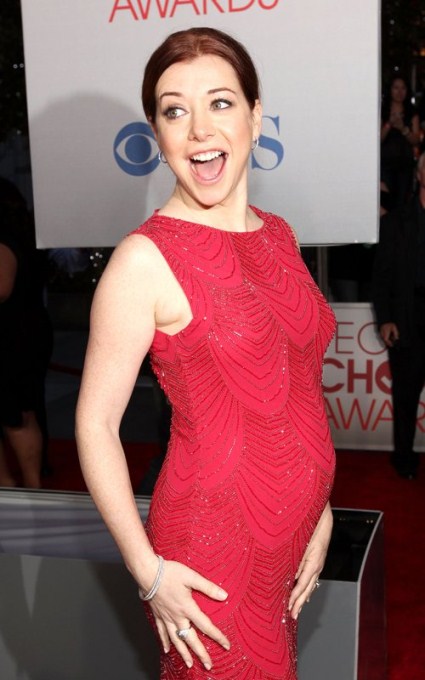 The stars were out in force at the People’s Choice Awards in downtown Los Angeles last night. It was a who’s who of film, music and TV. One actress who walked the red carpet – complete with baby bump – was How I Met Your Mother’s Alyson Hannigan.

The popular star looked absolutely fabulous in a skin tight red sequined dress. There was no hiding son or daughter number two!  The 37 year old finished off her striking outfit with some sky high silver heels. Fellow expectant celeb Hilary Duff would be proud. She’s been donning heels throughout her pregnancy despite some criticism from medical experts.

She had husband Alexis Denisof by her side. He even stroked her growing belly for the cameras! They are very proud of the impending addition to their family of three. They have a young daughter Satyana Denisof.

Alyson – who is expecting baby number two – was glowing throughout the evening. She even had a job to do … presenting an award with her American Pie co-star Jason Biggs. They’ll be back on the big screen soon in the Reunion movie. In between facing the cameras on the red carpet  – and making an appearance on stage  – she took a well earned break in the audience.

A night out at the Nokia Theater meant Alyson and Alexis’s little girl Satyana was at home with the babysitter. It’s not often you see the pair without their daughter. They’re often photographed taking a walk or a trip to their local park. Who knows…she might have tuned in to see her famous Mom on stage.