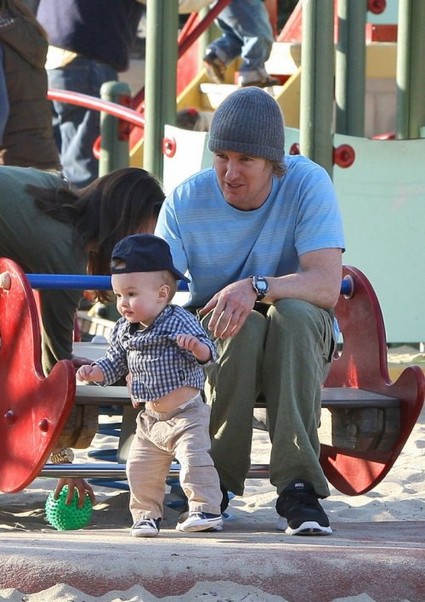 Fatherhood agrees with actor Owen Wilson. The movie star was spotted at a park in Santa Monica yesterday on a play date with his 11 month old son Robert Ford. He was just like every other proud Dad – even taking photos for the family album with an iPad.

Ex-girlfriend Jade Duell was also on hand as Robert enjoyed his trip to the playground. The toddler – sporting a trendy backwards cap, checked shirt and cargo pants – was smiling and laughing and having a great time in the sand. He was just happy to have his Mum and Dad there for some fun in the sun.

Sadly Owen and Jade are no longer together. The pair split not long after Robert was born in 2011. But they still get along for the sake of their adorable little boy. There has been talk of a reconciliation and these happy snaps certainly show the pair on good terms. Who knows what the New Year may bring…

We’re not used to seeing Owen in the role of family man. Only last weekend the Hollywood star was partying in St Barts with a string of scantily clad women. This week he’s a hands on father taking his kid to the park.

Robert Ford may soon have a Golden Globe winning Dad. Owen is nominated for his role in Midnight in Paris at next month’s awards. It’s somewhat of a turning point in the funny man’s acting career. You can bet any acceptance speech will mention his precious little son.