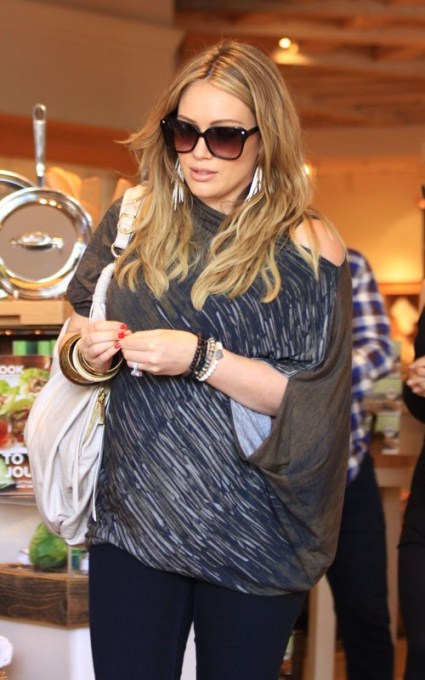 Hilary Duff was looking very pregnant during a shopping trip in Beverly Hills yesterday. The 24 year old mum-to-be stepped out with husband Mike Comrie for some post Christmas retail therapy. The couple were also joined by family members during their afternoon spend up.

The former child star didn’t let a growing baby bump get in the way of fashion. She teamed her blue skinny jeans and bat wing top with a pair of sky high Christian Louboutins. They’ve been Hilary’s shoe of choice throughout her pregnancy. No practical footwear here. It’s glam all the way!

We don’t need to go snooping through her shopping bags to find out whether it’s a boy or a girl. We know she’s stocking up on plenty of blue baby goodies. The star of Lizzie McGuire has already announced her first child is a boy.  The baby is due late February/early March. The Comrie-Duffs are keeping Mum on the exact date.

Hilary hasn’t slowed down too much while pregnant. She did drop out of the movie Bonnie And Clyde but hasn’t exactly been putting her feet up. The one time pop singer has a new career as an author. Her first two books landing her on the New York Times Bestseller List. There’s talk novel number three will follow in 2012. She may also return to the studio to record another album.

The native Texan doesn’t take her success and more importantly life for granted though…she recently said ‘I feel so lucky that I’ve had an easy pregnancy and I hope it stays that way.’