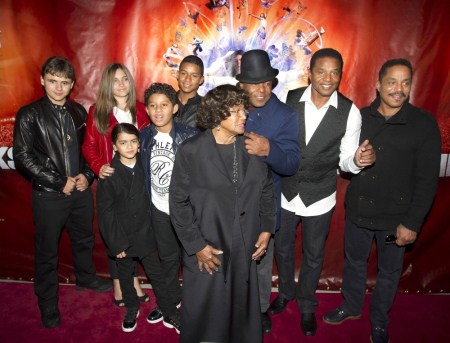 Michael Jackson’s children Prince, Paris and Blanket attended the premiere of Cirque Du Soleil’s Michael Jackson show in Montreal, Canada on Sunday.  They were accompanied by their grandmother Katherine and other family.

According to Jackson’s mother Katherine, Jackson had always wanted to do show with the Cirque Du Soleil.

“His mother said Michael has always wanted to do a show with the circus, so if there is a show about Michael, it will be Cirque du Soleil,” told Daniel Lamarre, president and CEO of Cirque du Soleil.

The “Immortal World Tour” combines acrobatics and dance with Jackson’s massive catalogue of hits spanning more than four decades. The $60-million tour has stops in cities across Canada and the United States, with Ottawa as the next stop on Oct. 7.