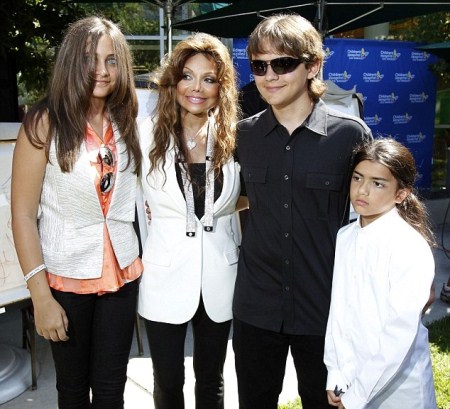 Michael Jackson’s children Prince, Paris and Prince Michael II attended a special ceremony to donate 10 pieces of art created by Michael Jackson. The pieces were donated to a children’s hospital in Los Angeles.  The sketches included one of Mickey Mouse, a throne and a drawing of Jackson’s icon Peter Pan. There was also one of his famous moonwalk. The works are signed by Jackson and his children.

Jackson’s mother, Katherine, joined the children as well as his sister, La Toya, who said the pieces would help lift the children’s spirits.

“You look at this, it makes you happy. They’re whimsical, they’re magical and there’s just joy and peace.”

“I know that when you see this and the kids see it, it will bring some type of joy to them, and at the same time, I know it will bring joy to my brother as well.”

“I know that Michael wouldn’t want this art in a better place, than a hospital like this that will help children, and people everywhere,” she said.

“I’m so proud that these pieces are here to help those who need it.”

The artwork was donated by Brett Livingstone-Strong, an artist and friend of the singer who died in 2009.