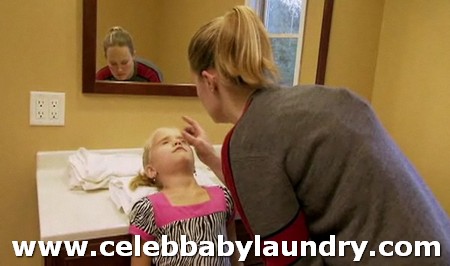 TLC’s hit series Toddlers and Tiaras is a reality series that debuted on TLC in 2009.   The show follows the controversial world of child beauty pageants, looking closely at the pageant contestants and their families as the children prepare for their pageant shows.   The current episode brings us to the glitz to the windy city with the Southern Celebrity Chicago Mini Nationals pageant.   On this episode we meet Savannah, age 7 who is back after a 2 year hiatus.

In the clip for the show Savannah’s mother Shanna explains to us that Savannah’s eyebrows were shaped with a razor when she was FIVE and now they are growing in black and thick.   Is it just me or is this ridiculous, shaving a five year old’s eyebrows?  Well Mom has the solution she has poor Savannah bent over and is plucking her eyebrows.  Poor Savannah in her baby voice says “is it going to hurt” and Mom so sensitive NOT says “that is what you get for shaving your eyebrows for two years.”

Ughhh what a repulsive women she is the one who shaved the poor girls eyebrows.   What do you think about eyebrow shaving for a five year old and eyebrow plucking for a seven year old?  Check out the video below and let us know in our poll below!

Jury Member From The Casey Anthony Trial Speaks Out