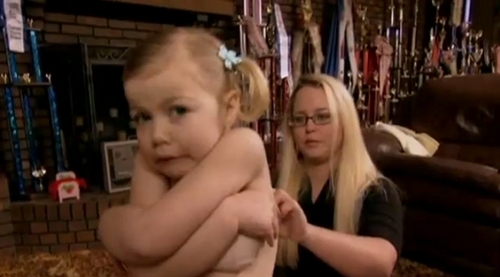 This is disgusting! As if exploiting children wasn’t enough, now they’re being dressed like prostitutes, overly sexualized, taught that beauty is everything, and now a judge has basically ruled it’s all good parenting! Lindsay Jackson, whose daughter Maddy Verst was featured on the hit TLC show Toddlers & Tiaras, was in a nasty legal battle with Maddy’s dad, Bill Verst. Bill doesn’t want Maddy competing in pageants, and today a judge appointed joint custody with Lindsay as the primary guardian.

The crazy mom claims, “Maddy loves pageants, she begs to go to them every weekend, which we just can’t do,” she said. “She was so happy when she was on Toddlers & Tiaras. On Sundays when they’re over she cries because she doesn’t want them to end. I do not have to force her to do them, Maddy has so much fun she would do them all the time if she could.” I’d just like to point out that kids cry when there’s no more cake too–that doesn’t mean it’s healthy for them! And a child’s addiction (or passion, as I’m sure she’d call it) is supposed to be helped and tempered by parents, not cheered on!

Fortunately, the Kentucky judge did a little something to protect Maddy from her mother. A court clerk explained, “the ban against Maddy participating in pageants has been lifted. She can participate in them, but there has to be a written agreement by both parents.  The agreement does not have to be submitted to the court. This will still be an ongoing case since the parents disagree about the pageant participation.” It sounds like dad Bill is really against Maddy’s involvement. He cites a particular costume of Dolly Parton with fake boobs (the picture above shows mom strapping Maddy into the fake cleavage), which we doubt Maddy thought of and sewed herself. This poor little girl is at such a disadvantage. What do you think of child pageants? Should Maddy be placed in a safer home?