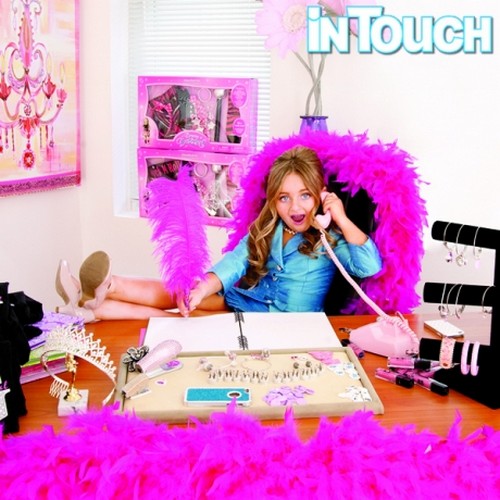 OMG! We want Isabella Barretts‘ life right now. Believe it or not, but this little girl is a millionaire, who you may already be familiar with; she was a regular on Toddlers & Tiaras where she competed to win the price of hefty paychecks if she won the beauty pageant title. The six-year old, however, has moved on from her days on the reality show and has since branched out to start her very own empire.

At just SIX, she already owns her own office where she holds meetings with CEOs who discuss business decisions with her mother, Susanna Barrett. Isabella made a whopping $1 million from her Glitzy Girl makeup and jewelery collection that is said to be selling “extremely well”, to which she responded to by saying: “It’s a lot of fun,” the youngster confidently tells In Touch. “I’m the boss!”

Yes, Isabella still attends school, but as soon as soon as the bell rings, she’s off to the jewelry factory, trying out new products that she could possibly see other children buy, which she will then have to approve of before it goes for sale. Pretty fun job, right? You simply choose whatever you like and what you don’t and once you’ve made your decision, the company sells it and you make your millions of dollars. Sweet.

Susanna then continues: “She picks out the designs for our charm bracelets, and she’s tried on every color in our lip-gloss line,” says Susanna, trying to make it sound as if her daughter’s job was actually work. “She is the guide for what’s cool!” This stills leads us to believe that this young girl must be very confident in herself to be doing all of these things at such a young age.

She definitely knows what she wants to do as a career, and she’s living the life she’s always wanted. Just like mommy, Isabella is more than happy to brag about whatever she has won or achieved to other people, not necessarily to make other girls look bad but to show them that just because she’s a minor doesn’t mean she’s incapable of doing it herself. “When Bella would win a pageant or signs a new deal, we would print the title she’d won on a charm and put it on a bracelet, so she could brag about her accomplishments.”