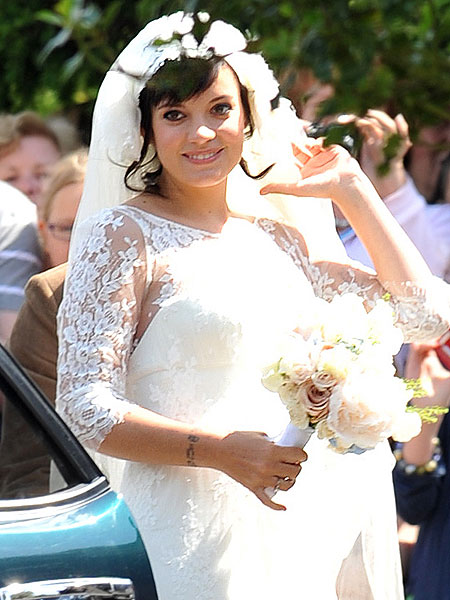 Lily Allen’s husband announced to friends and family they were expecting on their wedding day.  Allen is excited to become a mother, but is very nervous. A friend told Closer: “Lily’s ecstatic about being pregnant, but is struggling with anxiety. She didn’t really dance at the wedding because she’s nervous about being too energetic – although she and Sam had a gentle slow dance.

Her anxiety only seems normal. Last year, she miscarried six months into her pregnancy.  A source said, “She’s scared of miscarrying again. Doctors have said she should try not to worry but, after everything she’s been through, she won’t be able to believe it until she has a baby in her arms. She’s had a couple of early scans and plans to have them every few weeks for peace of mind.”

Lily is not the only one that is nervous: “Lily’s mum is nervous, too, but they’re all very supportive. Sam had wanted them to wait a while before trying again, just to make sure Lily had recovered emotionally and physically, but now that they know she’s expecting, she’s eating well, getting lots of rest and trying to avoid any stress.”

Luckily, Lily has a supportive husband who is helping her deal with the moodiness and emotions that come along with pregnancy:  “Lily’s hormones have also left her grumpy and exhausted. She’s emotional, but Sam has been so supportive – every time she freaks out, he talks things through. It’s just what she needs. Sam’s the first man to take care of Lily – he brings her tea in bed and rubs her feet. He knows how desperate she is to become a mum. She sobbed her eyes out when she found out she was pregnant again.”

January Jones Pregnancy Was Not A Surprise