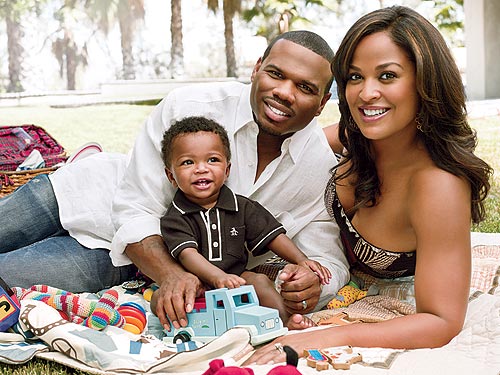 In a new interview, Laila Ali says she was initially concerned her son C.J.  would be jealous of his new sister. Her is her first child and, therefore, is not used to sharing mommy and daddy.  However, Laila’s new baby girl, Sydney J. has been surprisingly well-welcomed into the family by C.J. and jealousy hasn’t seemed to be a problem.

“Right now he’s being a little brat because he wants to keep going on the slide, but he loves her.  I was concerned that he was going to be jealous, but he’s not. He loves her to death, and he’s been nothing but a good big brother.”

Since Laila is usually used to being in the finest of shape, she is now setting her sights on getting back in shape. While she’s used to vigorous workouts, she is insisting on taking things more slow and steady.

“I have 20 more pounds to go. People always say it’s easy for me because I’m an athlete, but I have to work. I have to eat right, I have to work out, and now I’m working out at home.  I have a spin bike, I have a treadmill. I’m running, I’m doing hills, I’m doing sprints … and 45 to 70 minutes of cardio.

The hardest part for me is taking it slow. You can’t hit it too hard when you’re nursing, and I’m nursing.  I could get it off much faster, but I have to take it slow while I’m nursing. The most I can lose is a pound a half to two pounds a week. I’d probably be doing double that if I weren’t nursing.”