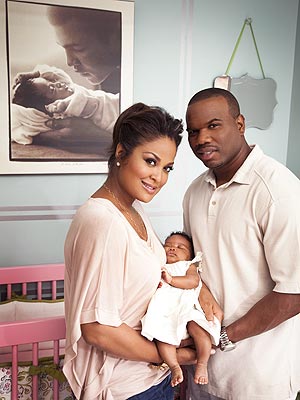 Laila Ali revealed she made a huge breast feeding mistake with her first son C.J Muhammad.

“About a week into it I made the mistake of giving my son a bottle so my husband could help, and then the baby started liking the bottle, and I ended up having to pump,” Ali said.

“I wasn’t going to give up or stop. I feel like God gave us, as moms, our own custom formula specifically for our child. Why would I want to go buy something from the store instead, that’s made in a factory?”

Now with her second child, Sydney J she has learned from her previous mistake.  Her husband, Curtis Conway knew he had to let Ali take control.

“He knew that I didn’t want to introduce the bottle too early with Sydney, but it wasn’t like I had to say, ‘Honey, you’re going to be able to help in other ways,’” Ali explains.

“He already knows, when it comes to the baby and feeding the baby and doing things the best way, I’m in the lead as far as that’s concerned. We don’t have an issue with that.”

“Breastfeeding is a job made for moms to do. I don’t see arguing with that, though I am sure people will,” she says. “It’s such a short period of time in a child’s life that you are going to be breastfeeding, so let Mom do her thing.”

Gwen Stefani’s Kids Spend the Day With the Nanny