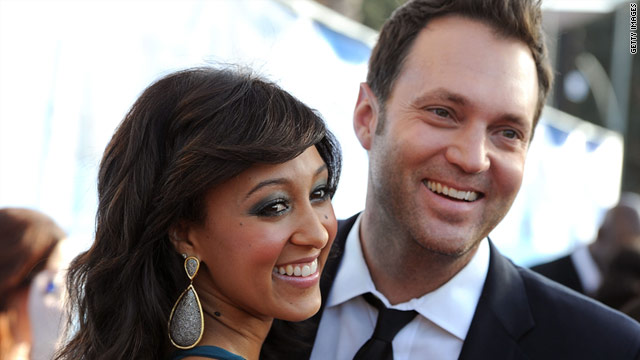 This week seems to be full of excitment for the Mowry family. Tia Mowry is due to have her baby any day now. On top of that, her twin sister Tamera Mowry, 32, got married to her Fox News correspondent boyfriend Adam Housley, 39. The couple got married in Napa Valley on Saturday. Tamera wore a Carolina Harrera dress, with over 300 guests in attendence.

Tamera had eight bridesmaids. Her maid of honor was Andrea Regalado and Tia served as her matron of honor. The eight groomsmen included Hously’s brother, Arik. The groomsmen all wore tuxedos and Converse.

“I’ve always wanted an outdoor wedding with lots of flowers. I feel so lucky to have this beautiful day marrying my best friend. I feel so blessed to be marrying such an amazing man,” Tamera said of her wedding. Housley added, “Tamera is beautiful inside out.”

The ceremony was performed by pastor Dudley Rutherford. The newlyweds presented their parents with long stemmed roses. Mowry explained this by saying, “We wanted to honor them, because without their love and support we wouldn’t be the people we are today.” Mowry later changed into a two-piece outfit by Dolce & Gabbana for the reception. The newlyweds first dance was “Faithfully” by Journey

Tia and Tamera, who were first launched to fame in the Emmy-winning TV show Sister, Sister, are now starring in their own reality show this summer called Tia and Tamera Take 2. The show will be playing on the Style network.

Is Marie Osmond Planning Another Baby?