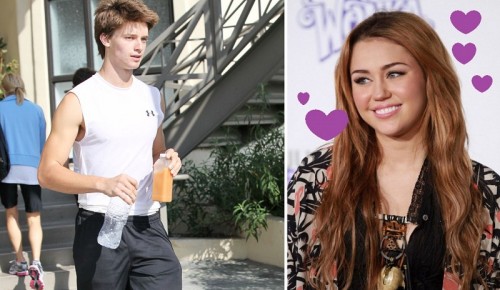 Breaking news! Miley Cyrus may have found a new beau in Patrick Schwarzenegger. Patrick is the son of Arnold Schwarzenegger and Maria Shriver, who announced their separation this past week.  This possible fling budded when Miley heard that Patrick had a crush on her. Cyrus then told pal Selena Gomez that she was interested, and Selena just so happened to have his number. Miley gave Patrick a call and he was “surprised and thrilled to receive a call from Miley.” The pair grabbed lunch together in Malibu last month.

An insider stated, ““Miley is looking to rope Patrick into a full-fledged romance.”

Patrick is a 17-year-old entrepreneur and runs a business called Project360. This is a clothing line that Patrick co founded at age 15 and it donates %10 of every sale to various causes. Patrick claimed, ““My grandmother always said, when you receive a paycheck, you always have to put a certain amount to your savings, and 10 percent right away to charity.”

The charity’s clothing has been worn by big names such as Reggie Bush and Eva Longoria, and featured on Access Hollywood. The different clothing includes T-shirts, braclets, and hoodies. They are carried at Bloomingdale’s and Henri Bendel.

Sounds like Cyrus has developed a little crush of her own!