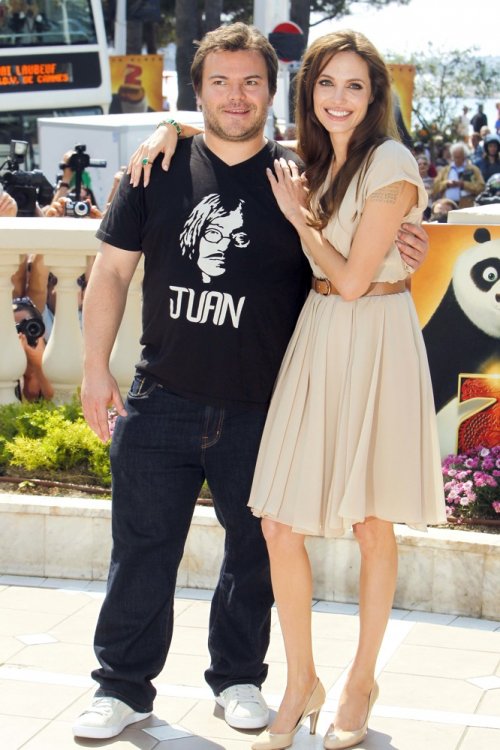 We have learned that Jack Black may be responsible for telling the world the world that Angelina Jolie was pregnant during the Cannes Film Festival in 2008.   Jolie didn’t seem to mind. At the time, the hot mama was pregnant with twins Knox and Vivienne. Jack’s wife just happened to be pregnant at the same time, and Jolie decided to surprise her with a special gift.

During a recent interview, Jack said, “You were preggers, and I spilled the beans. And my wife, Tanya, was like, ‘That is the most amazing maternity dress I’ve ever seen.’ You had this gorgeous gown, and she was less preggers, but she had one on the way as well.”

How did Jolie respond?

“And you’re like, ‘Oh, thanks.’ And then, what do we get in the mail like the next week? That gown,” Black said, “You sent it over. It was one of the sweetest gifts of all time.”

The picture above shows the duo at the same film festival today in order to promote their new film, Kung Fu Panda 2. Jack is coming back playing the same character, Po. He said that he isn’t looking to expand his family in farther right now. He said, “The lady says, ‘No mas.’ They’ve been a handful, these two boys. I don’t know how you do it (turning to Jolie). But you never say never.”

Kung Fu Panda 2 comes out in theaters May 26.