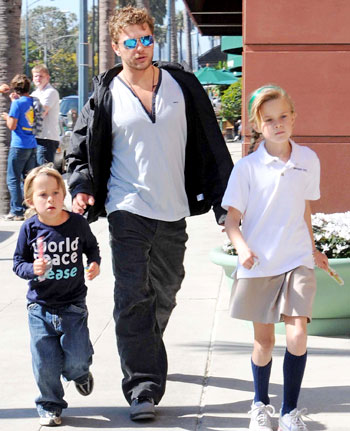 Lincoln Lawyer star Ryan Philippe is glad his ex-wife Reese Witherspoon and himself never depended on nannies to raise their children.  Ryan and Reese have two children, daughter Ava,11 and son Deacon, 7.  Ryan says he is proud that he and Reese were hands on parents and their children are grounded.

He said: “I imagine it would have been more difficult if we weren’t as hands-on as we were or allowed them to be raised by nannies – I think then they would become assholes.  But you’re constantly educating them – we have two incredible little people that we’ve raised. I’m proud of us for that fact.”

Ryan is soon to maybe going to be a father again his ex girlfriend Alexis Knapp claims he is the father of her baby.  Meanwhile is ex-wife Reese remarried her boyfriend Jim Toth this month.

Is Tyra Banks Trying For A Baby?