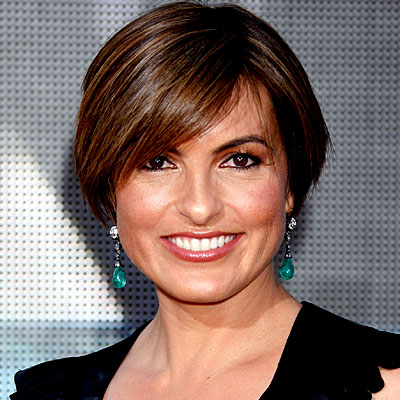 Mariska Hargitay, 47, daughter of Jayne Mansfield and Pro Bodybuilder Mickey Hargitay, who plays TV’s favorite cop, Olivia Benson, and hubby Peter Hermann, who have been hoping for another child for years, brought her new bundle of joy back to New York last week and was yesterday spotted emerging from her Upper West Side home with the tot in a nanny’s arms.

Hargitay, said to be TV’s highest-paid actress, and Hermann, 43, married in 2006 and already have a 5-year-old son, August.

A source told us, “Mariska was really affected by her accident in 2008, which caused a collapsed lung.  She had been trying for a baby but decided to go for adoption.  ”

“Law & Order has been filming in New York, but they wrote her out of the script for this week and she will not return until Monday,” our source said.  “This has been kept a huge secret on the set – somebody who was hired as a crew member was fired for tweeting about it.  She went down to Texas late last week to get the baby.”

Hargitay told Good Housekeeping last year: “When I think about having a bigger family, sometimes I am so in love with August that I can’t imagine anything else, and it’s so perfect, our little triangle here.  “But then you think, ‘Oh, I want to have another kid.'”  Would she consider adopting?  “It’s not out of the question.”

Hargitay also recently said that becoming a mom has brought her a new understanding about her own mother, screen siren Jayne Mansfield, who died in a car crash in 1967, when Mariska was just 3.  “It’s not a source of pain or angst anymore,” she said.  “I understand her in a new way that gives me peace.  Being a mom has been healing.  Now I understand the love she had in her, and it makes me feel closer to her.”

Hargitay’s rep confirmed, “She has adopted a baby and is deliriously happy.”